For US residents only.

How Treatment May Help

What is the most important information I should know about ZYKADIA?

ZYKADIA may cause serious side effects, such as:

ZYKADIA is a prescription medicine that is used to treat people with non-small cell lung cancer (NSCLC) that:

It is not known if ZYKADIA is safe and effective in children.

Consider a powerful therapy for your type of cancer

This study measured progression-free survival (PFS). This is the time from when the patient is first assigned to receive a treatment until the day that a computed tomography scan confirms that the cancer is growing again or the patient dies (even if the death is not due to cancer).

Results in the overall study population

ZYKADIA doubled the amount of time patients lived without their tumors spreading or growing vs chemotherapy. 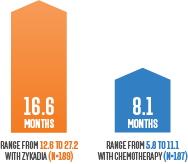 ZYKADIA has not been shown to increase how long patients lived compared with patients who received chemotherapy.

This means that in many patients treated with ZYKADIA, tumors shrank or disappeared.

Duration of response for ZYKADIA vs chemotherapy

Duration of response is a measure of how long a treatment can keep tumors from growing again after a response has first been detected. This is different from PFS, which measures time until tumor growth in everybody who was assigned to treatment—whether or not they responded.

Patients treated with ZYKADIA had a longer median length of response: 23.9 months vs 11.1 months with chemotherapy. 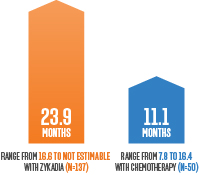 ZYKADIA may help tumors shrink or disappear in patients with ALK+ metastatic NSCLC.

ZYKADIA may help when taken as a second-line treatment

ZYKADIA has been shown to shrink or slow the growth of tumors in patients who had already taken another anaplastic lymphoma kinase (ALK) inhibitor.

ZYKADIA was studied in a clinical trial in 163 patients with ALK+ metastatic non-small cell lung cancer (NSCLC) who had previously taken crizotinib. They had stopped taking it because their NSCLC had worsened or they could not tolerate it.

The results of the study showed:

In more than half of the patients, ZYKADIA reduced the amount or spread of the cancer or reduced the size of the tumors.

Find out about financial assistance for patients

Resources to help you with your ZYKADIA treatment

Next: How to Take Treatment

You are now leaving the Novartis site and moving to an external website independently operated and not managed by Novartis Pharmaceuticals Corporation. Novartis assumes no responsibility for the site. If you do not wish to leave this site, click Cancel. Or click OK to continue.